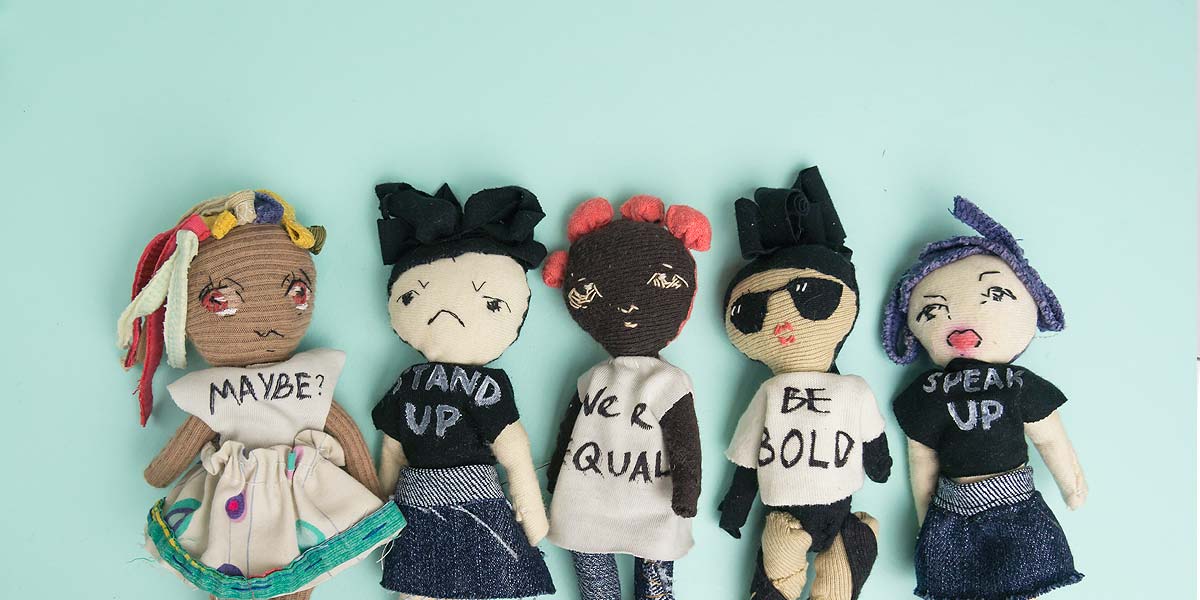 “Hear us now”, I shouted standing on a trash bin, among so many others like myself, around which cars had to part. But only in my mind.

Most of my life, I lived in a place in which such action could have me jailed.

Oh no, I don’t want to be physically jailed too.

Help arrives but only when you want it

Then came the Mighty Girls.

They are dolls. They are girls.

They are me. They are me-then. I was just so slightly younger, so slightly less embarrassed to call this fantasy version of myself girls. I now identify as a person.

Something like a soft version of moulded plastic dress up dolls. What I had in mind was a DIY-eco-(anti)-fashion doll that’s like a cross between a treechange doll and an upcycled fabric doll. Actually. I have no idea what I’m saying.

What I created instead was a bunch of small raggedy resistance with resting bitch faces. Not even anti-fashion, but no fashion. No fancy dress. No dress. No pants. Just a tee.

I can make clothes. I had the knowledge. I had the experience of making clothes for people—in the worst case scenario, to show wealth, in better and more common scenarios, to speak for them in a way they could not with their voices.

Is that what I’m doing? Noisybeak speaks?

Every now and then, one or two slogan people dolls pop out of my head through my hands. ( Tho not nearly as often as protesters take to the streets here in the City of Melbourne.)

Where do dolls come from?

I don’t know where these mighty- girls-people-doll-things with so much spirit come from or why they are here. I mean, I don’t even watch news on TV.

A few years ago I would have called now-me irrational. I can’t lie. The energy is in the air. And dust settles on me.

Not as many as I have been called to make have been made. I regret it tho regret is quite useless.

I had no idea where the energy was coming from. I made some. Then I did not. Most of the time resisted doing what my mind could not understand.

Being is making is being, perhaps

Mighty girls have changed over the years.

Some girls, some not, some non-binary, some with no face, some with knots for arms some with wires, some bigger some smaller, some more animal on the outside. (Maybe some more so on the inside?)

I made a big person doll for my Mr Lunarian, so he could learn to give himself love as he gives to others.

I identify with some more than others.

Toadiana shows me what self-worth looks as a toad or human all the same.

Many don’t even wear clothes anymore. They don’t need it.

Naked we come, naked we go. So it goes.